Salt Mystic is a powerful storytelling framework: a character, location, technology and concept setting designed for science fiction & fantasy dreamers to tell stories and to live them. It is an honest and heartfelt effort to bring something new and exciting into the world.

“…the most mind-blowing part of this volume is the rich, robust worldbuilding lore and background. With hundreds of illustrations and art pieces and immersive and detailed entries, the distinctive machinery, people, places and history of the Salt Mystic world come gloriously alive!  The publishers call this volume an Immersive Storytelling Engine, and they mean it!” -SpikeyBits gaming site

At its core, Salt Mystic is a terrain-based trading card wargame, with a storyline advanced in digital art, novels and short fiction. And there are shirts and mugs, because there just HAD to be shirts and mugs!

But what’s it about?

Two thousand years ago, the Salt Mystic declared her vision of the forces of history, and how to harness them to shape human events. Naraia was the name they gave to the wondrous, sprawling republic that arose from her teachings, encompassing countless thriving civilizations on land, floating on the seas and tethered to the sea floor, and tucked into artificial pockets of space called ‘oriels’.

But there’s more power here than guns and fire.

The Salt Mystic injected cunningly engineered stories into the folklore and myths people pass down, ones capable of possessing a person’s soul. Foreseeing the wars and injustice that could emerge from Naraia, she hid tripwires in these myths that inspire world-shaking Guardians when they’re needed the most. A Guardian arises maybe once in a generation. It changes everything.

And it can arise in anyone at all.

At the height of The Infinite Republic, inflation engineers generated artificial pockets of space they furnished with impossibly huge simulations: glorified terrariums, complete with skies, lakes and cities, farms or warehouses. Those artificial pockets are called ‘oriels’, and no one at all knows how many there are still out there now that the Republic is long gone.

Many contain thriving civilizations such as this harbor town, peacefully unaware that their world isn’t all there is.

These lighting-soaked oriel gateways were an important part of the Infinite Republic before its fall, typically embedded in the ground and usually large enough for a multi-laned highway plowing straight inside. Sometimes they were pedestrian, sized for a set of stairs, sparkling and bathed in light; just step down like a subway station and back up into another world.

They’re still out there, most still operating though long abandoned. Anyone with the courage can simply step inside to see what adventure (and what doom) they find inside!

Dirigibles are a popular mode of transport in the world of the Salt Mystic, and many landing platforms buzz with commerce and activity on a clear day. Lore agitators can usually be found mixing in the crowds, mixing propaganda and persuasion and hatching plots to try and raise this generation’s Guardian before its time.

Something like that could rip the world apart like the War Of The Rupture, or it could bring about a beautiful new order. Either way, it will be a boneshaking day for us all!

The Salt Mystic game is primal and intimate war in a bottle…easy to learn, with a small set of core rules. We wanted to avoid tedious assembly and painting of miniatures, confusing and burdensome fluff and lore, complicated rulebooks that drag on for hundreds of pages, and streams of nameless soldiers impossible to relate to. At heart, we wanted to tell a story.

In fact, our original manifesto for the game was:

How can I get started?

Download the free Basic Rules to take a look inside this richly developed and expansive world, in what’s been called a “science fiction theme with a cowboy flair”.  Inside, you’ll find the basic rules to play both the classic 2-player game as well as the terrifying solo ruleset called “Wolfpack Mode”. A game of Salt Mystic requires two 30-card selections from War Marshal card decks, which are available on DrivethruRPG.

War Marshal Segmond is a master of the powerful lore of the Salt Mystic. Although deadly with a ball lightning carbine and shrewd in battlefield tactics, his greatest weapon is his own voice. Considered supernaturally persuasive, Segmond is said to steer enemy troops like sailing ships.

War Marshal Karak, known as The Hammer Of The Red Witch, is a genius of strategy, leveraging unique insight into battlefield data and his enemies’ weaknesses for devastating impact. But his greatest strength lies in a shadowy pact allowing him the ability to call in fiends from the shadows to snatch away his enemies.

Sounds interesting…what all is in the Sourcebook And Core Rules?

Can I play Salt Mystic online?

Sure! You just need someone to play with and Steam accounts to access Tabletop Simulator.

The visuals look unique. Can I see some more artwork?

Thanks for asking! Tour artwork inspired by and advancing the story of the Salt Mystic series on Artstation. Shirts and mugs, you say? Where can I get some Salt Mystic merchandise?

Awesome. Head to the merch store. The shirts are super comfortable, and we’re particularly fond of the Skull & Carbines decal sticker. Looks fantastic on a laptop. You said the story advances in novels and short fiction. Where can I find that?

Read the first book in the Salt Mystic series, TEARING DOWN THE STATUES. It’s the electrifying story of this generation’s true Guardian. Maybe. Anyway, it’s funny and scary and has great dialogue with characters that pop. And cool machines. What else do you want? 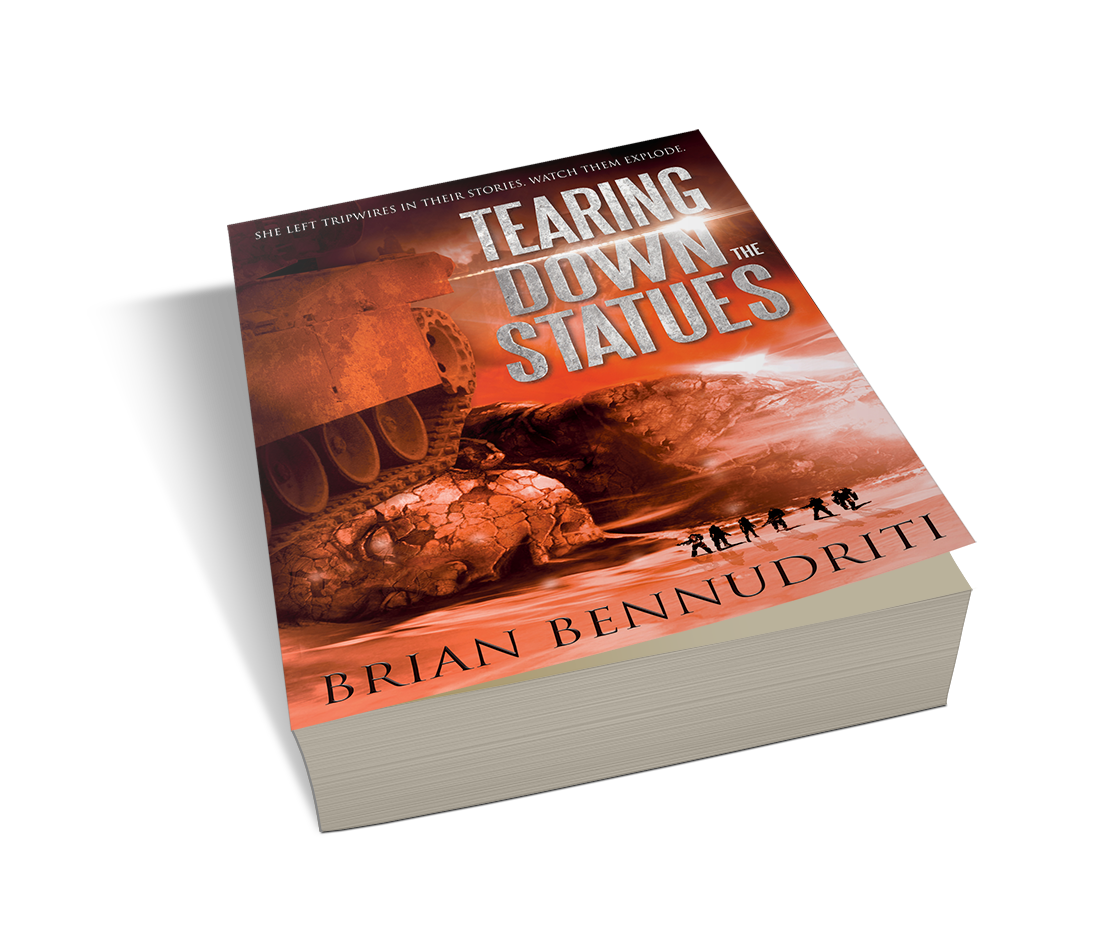 Occasionally, we share short fiction and art pieces set in the Salt Mystic world here on this site and on the Grailrunner Twitter and Facebook pages. You don’t have to catch all them to know what’s going on, but it enriches the experience big time!

We do periodically accept short fiction and art pieces set in the Salt Mystic world here and on our social media. If you’re interested in participating, pick up a copy of the Salt Mystic Core Rules And Sourcebook for inspiration and contact us here:  brian (at) grailrunner.com.

Art:  Generally, we don’t pay royalties or purchase art pieces unless specially commissioned, but feel free to contact us for possible interest in your project. By submitted your work to us, you’re granting electronic-display rights on the Grailrunner website and its associated social media pages (Twitter and Facebook).

Short fiction: Short works of fiction must include at least one element from the Sourcebook, be original work with rights owned by the submitter, and must not include anything resembling pornography or hate speech. No overtly political works will be considered. This is escapism and science fantasy. Lengths welcomed as high as 1,000 words, but not much longer. Contact at email above for more details. Even if we don’t purchase your work, you may still wish to have it posted on the sites.

(c)2022 All rights reserved. Salt Mystic and all likenesses contained within are the property of Grailrunner Publishing.