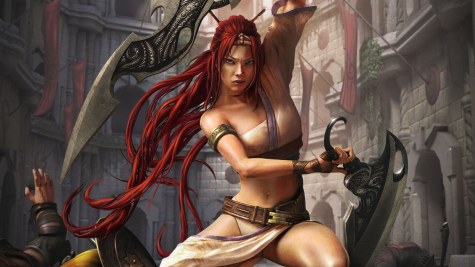 Louis Pasteur said that ‘Chance favors the prepared mind’; and that’s a fantastic quote. His point, I’m assuming, is that your mind is your instrument or your weapon, whichever metaphor does it for you. Whatever you’re up to in life, bathe yourself in stuff that will help you get better at it. Let cool, helpful things soak in. Then you’ll be luckier because you’ll notice opportunities you might not have otherwise.

So what does the hot warrior goddess picture I’ve attached here have to do with that? I’ll get to her in a little while. Go with me here.

Recently, I was thinking about where writers get their ideas. People ask that literally all the time. I bought a book years ago called, ‘It Came From Schenectady’ by a science fiction writer plagued by the question so often he started giving that answer when people asked him. Schenectady. That’s maybe a little funny. If you’ve read even a few articles on this blog, in fact, or the philosophy, it hopefully shines through that breaking ground in speculative fiction is kind of a big deal to me. I want to do whatever I can for myself and for other aspiring writers to BRING NEW THINGS INTO THE WORLD.

So I was turning that over in my head while coincidentally making my way through a book on the ancient city of Ugarit. This was a cosmopolitan city full of diverse folks and multiple languages, flourishing in 1500-1200 BC even though it was sandwiched between two superpowers of the day: Egypt and the Hittite Empire. My aim was to learn about the city and what life was like there; but the notion of finding story ideas was buzzing louder, so I was finding them on almost every page.

The theme in my head was very helpful to the writer in me; and it was this: just look for the strain on people. When there is some kind of tension set up, pulling on a person, there is a story to tell. I saw it in the tension between the two superpowers tugging on Ugarit. I saw it in the 1930’s race of archaeologists and linguists trying to be first to decipher the newly found script. I saw it in the very architecture of the city itself.

For example, the main city itself had two massive temples, one to Dagon (head honcho) and one to Baal (fertility guy, had sex with a cow while hiding from the god of death), with a library in between. The palace was on the other side of town and was bigger than the temples. There was a very rich guy named Rapanou whose house had thirty four rooms and his own library. I went dark for a few paragraphs as my mind wandered to the image of a teenage priest in training, leaned against one of the big temple statues and staring up at Rapanou’s house jealously, maybe wondering about one of the daughters who lived there. Maybe one of the statues would start speaking to him one full-moon night…

A few pages later, I came across this bit:

“Priests also had a military function, as is clear from references to them in administrative texts describing auxiliary military personnel; they are also listed in an army payroll text. Their role was that of support personnel, providing advice of a religious or oracular nature to military commanders. They were, in other words, an intelligence corps, purporting to provide divine counsel with respect to strategy and military operations.” -‘Ugarit And The Old Testament’ by Peter C. Craigie

That got me going on my little guy, because I saw him caught up in a rebellion against the Hittites, when all he wanted was to be left to his stone tablets and dreaming. I could see war-ragged army generals desperately shouting for divine insight into a hairy battle when the little priest was coming to doubt his own beliefs. Maybe because of something the statues had said. Maybe because of something Rapanou’s wild daughter had said.

You see how this just kind of gets going, right? Spitballing. Weaving together stuff from everywhere like a jazz riff on whatever I’m reading or whatever I’m doing. That’s how it works for me. The book had just described the little port towns on the sea as having no more than maybe a hundred people in them. I know what little rinky dink towns are like; and so, probably, do you. Then I read this:

I saw a new guy, then, who’ll probably meet up with the other guy. This dude loved his quiet little foggy port-village, though he maybe dreamed of adventures…then he got pulled into this same conflict the priest was in. Now I had a couple of folks stirring into the soup, and the possibility  of massive naval battles, which I love, and talking statues that had offered a mystery of some kind. I’m also reading Patricia McKillip’s “Riddle Master” trilogy, so probably the statues had offered a riddle.

But it was still kind of plain, needed to go crazy. Needed something with pep. Riddles have been done. So I totally lost whatever I was reading and just put it down to ponder…what is REALLY going on with this mysterious riddle?

Ahhh…I had watched a couple of Harry Potter movies over Christmas, so Voldemort’s horcrux dealie-o was in my head too. The riddle was not given to the priest to help him at all, it was given him to become alive…to be spread among the minds of men enough to form a vessel for something to enter into. Something, obviously, terrible.

The warrior goddess up there was to represent Anat, the terrible war goddess of the Ugaritic Mythology who used to storm the throne room of the all-father so angry he would hide from her, and who would tear off so many soldiers’ heads and gut them with such glee she should laugh as she waded through all the blood. You should read some of Baal’s cycle of stories where she appears. She’s fantastic. Maybe it’s her that started all this riddle business, just because she’d be fun to write.

Like a late Christmas present, I realized then that history handed me a nice finish for all this. Around 1200 BC, Ugarit got blasted from history by a mystery invasion of people from the sea. We know almost nothing about all that. Fantastic. It writes itself.

Look, I’m never going to write this story. If you’d like to, have at it. Be my guest. It’s fun to dip into it, though, and make my overall point for today.

If you’re stuck looking for ideas…or if you’re interested in where (at least some) writers get their ideas, remember I said this: look for the strain on people, the forces tugging a person in more than one direction. Bathe yourself in fiction or non-fiction, or travel, or talk to people, or whatever information you can get lost in, and dig up things that shine. Then string them together and turn up the gas.

What I’m hoping…what I aspire to do…is not to forget that last part. Be original. Turn it up to crazy and do something new.

Louis Pasteur changed everything about disease and healing when he did what he did. His quote is a sound one. Let’s live it.

7 thoughts on “Chance Favors The Prepared Mind: Where Do Writers Get Their Ideas?”