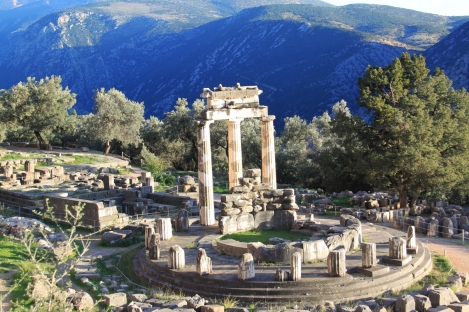 “You are truly home only when you find your tribe.” Srividya Srinivasan

What if I told you there’s a book I go back and read in random places, not even straight through, that doesn’t have a plot, written by a guy who lived 1,800 years ago that wasn’t that great a writer? But I go back over and over because he’s just interesting to me…he liked the same sorts of things I like. He saw things I can’t because they’re long gone. When somebody at a market said there was a cool statue up on the mountain hidden in a grove that you had to climb to see, this guy was up for it. He collected stories. He thrilled at history and listened for hours to old people chatting up about gods and sea monsters and miracles. His name was Pausanius. He has some things to teach wordslingers; but I’ll get to that in a bit.

Let’s back up. When I was in the Navy, me and a couple of other guys had a day in Spain to do whatever we wanted. One of us had spent a semester there and thought he knew some cool places to see, so early morning in a train station we were squatting over a map pointing at things and waiting on him – his name was Keith – to make his pitch on how we should spend this one day we had. One day, get that. Then we’re back to sea for months. Kind of a big deal to get this right.

He said Antequera was the place. Had to go there. Was awesome. When we asked what was awesome, he got vague and lost our confidence. Sounded like he was drawing a big blank and had drunk his way through that semester. But we hopped on the train anyway, with big dreams of seeing something we could tell stories about later. As the train passed a gorgeous valley and some amazing hiking trails and cityscapes I, at least, was really feeling down about the call we’d made. What in Antequera could compete with this?

So the train dumped us off at a desolate wooden platform with a dusty road leading up an empty hill like an old western movie, with a sign saying the next train back would be back at the end of the day. So we’re pissed at Keith, but trudged up the dirt road anyway. And it was one of the best days of my life. Jaw-gaping cathedrals, unearthly Catholic processions, Moorish ruins, some beautiful stone university, probably the best ice cream I’ve ever eaten, and the most amazing view of a harbor from a hillside I’ve ever seen. Pausanius did stuff like that; but he wrote what he saw in excruciating detail to capture fully the ruins and statues and art of his day. He was just always interested.

An example: “A road goes from here to a Sanctuary Of Asklepios. In the colonnade they keep an enormous sea-monster’s skull, with a statue of the Dream-god behind it and Generous Sleep lulling a lion.”

Another: “On the brow over the theater is a cave in the rocks under the acropolis, it has a tripod on it and inside Apollo and Artemis are slaughtering the children of Niobe. I myself have seen Niobe when I was climbing the mountains to Sipylos. Niobe from close up is a rock and a stream, but if you go further off you seem to see a woman downcast and in tears.”

At Cerynea describing a sanctuary of the Euminedes, the furies so terrible to look at that murderers or impious people were said to go mad from terror if even allowed to see the images, Pausanius said he had a look; and the images were made of wood and weren’t that big or scary to him. I think that’s funny.

At Phigalia, he described a sanctuary of Euronyme that wasn’t easily accessible and in a thick grove of cypress trees. Once per year the villagers would open the sanctuary for sacrifices to Artemis. The image was wooden, bound with golden chains, and showed a ‘woman to the hips but below that of a fish’. Some dude carved a mermaid; and these people worshiped it as the goddess of the hunt.

Pausanius is just full of cool sights and stories about all the great stuff he’d seen; and he was always on a journey somewhere. A freaking free spirit, man! I stole at least three locations or ideas from him for my first book, but just recast them in a science fiction setting. The guy’s writings are my muse sometimes; and I really enjoy letting him riff on whatever crazy Greek myth or absurd intrigue tale he feels like spinning. Like a crazy uncle.

What he’s telling aspiring writers is to chase down vague hints of wonders when they show up. Go see something if it sounds inspirational. Let the sights breathe and soak into you. For me, the real lesson of all this – the reason I honestly wanted to sit down and write this out for you – is you should find your own crazy uncle. Is there a book you go back to over and over, to wash over you and that brings the ideas running like a stampede?

I could say the same thing of M. John Harrison’s Viriconium series or Italo Calvino’s Invisible Cities. No idea what those are about, though I’ve spent hours wandering around inside them. They make me happy; and they put pictures in my head. What on earth more could you ask from crazy uncles? Go find one.